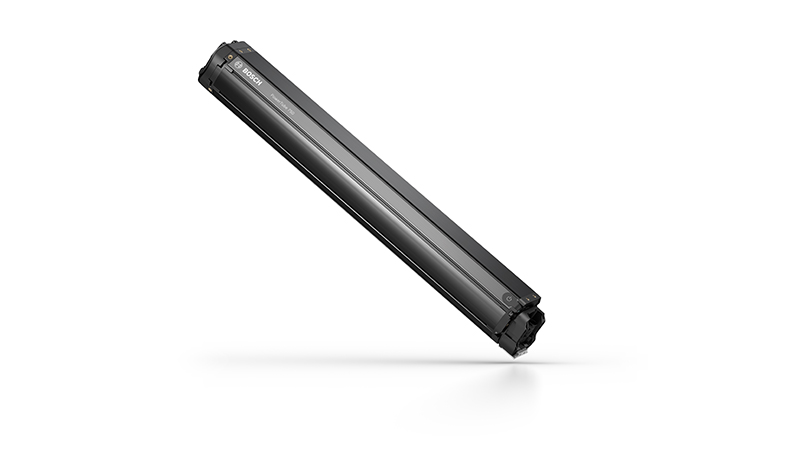 ENERGY FOR THE FLOW

Limitless riding enjoyment: Whether you're taking a jaunt through the countryside or cruising through the city – using the PowerPack or PowerTube means there's no limit to riding enjoyment. There's a suitable rechargeable battery for every requirement and every type of eBike; whether it's the rack variant, frame battery or the integrated solution. Thanks to their enormous range, long service life, intelligent battery management system and easy handling, Bosch lithium-ion batteries are among the most modern on the market, so all those decades of Bosch experience pays off!

PowerPacks are the fuel tanks of pedelecs. State-of-the-art lithium-ion technology makes them into efficient and longlasting suppliers of power. As an eBiker you can ride with them very conomically and thus maximize the range of a rechargeable battery charge.

TIRE PRESSURE
Rolling resistance can be minimized by proper tire pressure. Tip: In order to maximize the range, inflate the tires to the maximum permissible tire pressure.

RECHARGEABLE BATTERY & TEMPERATURE
With decreasing temperature, the efficiency of a rechargeable battery goes down, since the electrical resistance increases. In winter you can thus expect a reduction in the normal range.

CADENCE
Cadences above 50 revolutions per minute optimize the efficiency of the drive unit. In contrast, very slow pedaling is very costly in terms of energy.

STARTING & BREAKING
As with a car, frequent starting and stopping is less economical than long distances at a nearly constant speed.

GEAR SHIFTING
Correct shifting also makes eBiking more efficient. It is best to start off and take inclines in a low gear. You then switch to a higher gear in accordance with the terrain and speed.

The more conscientiously you treat the PowerPack, the further it will take you.

CHARGING
The battery should be charged under dry conditions and at room temperature.

STORAGE DURING WINTER
Store the batteries in a dry location at temperatures between 0 and 20 °C. Storage at room temperature is ideal. Being completely charged or completely discharged for storage is not advised for the batteries. The ideal charge status for lengthy periods of storage is approx. 30 to 60% or two to three LEDs on the battery indicator.

STORAGE
Temperatures below -10 °C and above 60 °C should be avoided.

TRANSPORT
For transport, the battery should always be taken off the eBike and safely transported in your car, for example.

CLEANING & CARE
Cleaning with a direct water jet is impermissible, in particular to protect the electronic components. Before cleaning, remove the battery. Occasionally clean and lightly grease the plug terminals.

WINTER USE
During winter use (particularly below 0 °C) we recommend charging and storing the battery at room temperature before inserting the battery in the eBike immediately before riding it. For frequent travel in the cold, it is advisable to use thermal protective covers.

INSPECTION
Using a diagnostic unit, the dealer can check the health status of the eBike, especially the battery, and tell you the number of charging cycles. 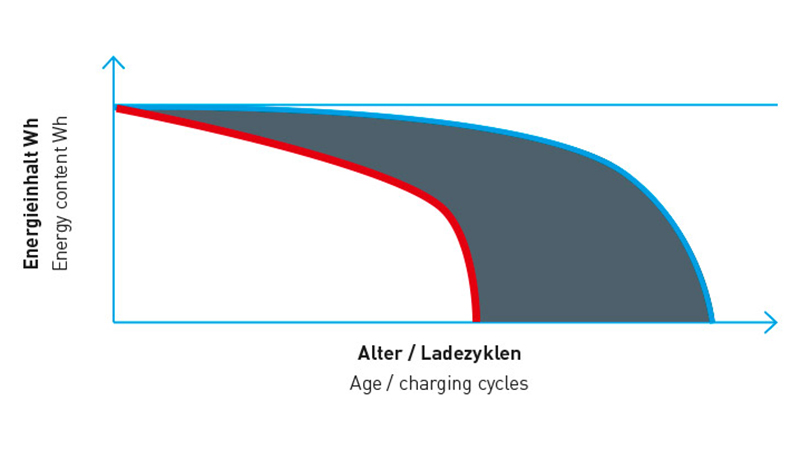 The service life of a PowerPack is influenced mainly by the type and duration of use. Like every lithium-ion battery, a PowerPack also ages over time, even if you do not use it. 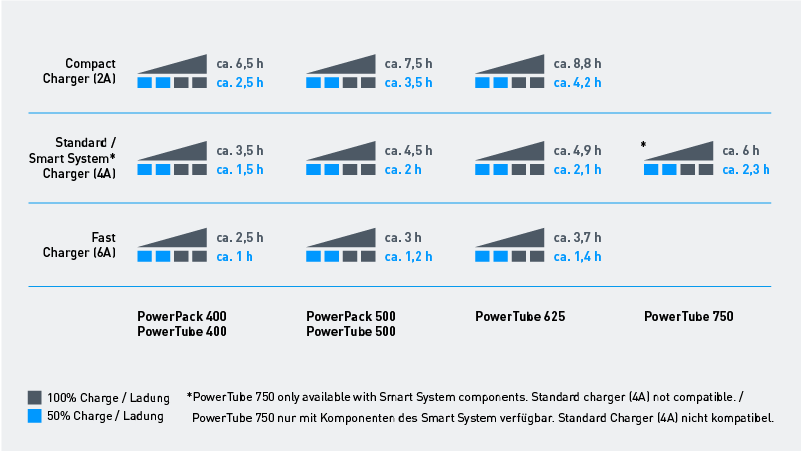 The charging time depends on the capacity of the battery and the charger type. The graphics show how quickly the various batteries can be charged with a particular charger.

CHARGING ON THE BIKE

PowerPacks and PowerTubes are particularly easy to charge directly on the eBike itself. You just need to insert the charging plug on the charger into the charging socket in the battery mount and insert the power plug into the wall outlet. Done! The batteries should be charged at room temperature in a dry location where a smoke detector is installed.

If the battery cannot be charged directly on the eBike, the PowerPack and PowerTube can also be easily removed.

CHARGING WHILE ON THE MOVE

The infrastructure of charging stations for eBike batteries is now well developed in many regions. Along popular bike routes, eBikers have access to an increasingly dense network of charging stations. In order to drive this development forwards, we now have a strong partner at our side with Bike Energy. This means that breaks from riding can be used as an opportunity to charge the eBike battery, free of charge.